July 25, 2021 was the cut-off date for submission.  This is the video I submitted into the challenge.  You’ll see I add some lights, lots of lights, added some more decoration to the box, textured some of the pieces a bit more.  I’m pretty slow at Blender at the moment, but doing these challenge I have learned alot.  I’ll be first to admin that this does feel unfinished.

Back in July 2021, I started tinkering with Blender again. I start by making the donut and then jumped into a couple of 3d challenges.  Here is a work in progress video where I am mapping out where the ball will drop and what objects it will bump into to make it down to the hole at the bottom of the box. Enjoy.

I’ve been getting a ton of spam comments to my blog.  I’m not sure why.  There is no traffic   coming to this website and I havent posted anything in a very long time.  Well, now you have to deal with a captcha if I have not approved a comment from you.

Sorry if your comment got deleted.  There were 7,000+ comments and I didnt have time to go through them.  I just did a bulk delete since the first 200 of them that I looked at were definitely spam.

God knows how long my 3d blog was down, but hey its back up now.  I haven’t really been paying much attention to it. I’ll try not to neglect you too much for now on.

So, the saga continues to make a Waterfall scene in Vue 5 Infinite. I have two new renders for you to view. As you can see I am still exploring.

The latest project is a nice waterfall scene. The scene is going to be a still shot so i don’t need to worry about animating the water coming down the waterfall. But, I might want to make this in the future, so if anyone has any tips on achieving that, please post a comment and let me know some tips. Always seeking good 3D tips.

A good tip before starting any 3D image is to determine the size of the render you are making. I am making this scene for a website where it might sit in a Flash header. You’ll see in the image below I have really just started out. I created 2 mountains and dropped a basic texture with an ecosystem on it. I’m not really too concerned with the textures at the moment, that will come later. Right now, I am focusing on the shape and size of the mountains. The mountain in the foreground I made in the terrain editor and cut out an area where I want to put the waterfall. This mountain is 1024×1024. The background mountain is further away so it doesn’t need as much detail so i made it in the terrain editor at 512×512. Its basically a prop. I didn’t spend anytime on it all creating its shape. I just opened the material editor, click the mountain button a few times, click erode, and clicked canyon. And TADA, that background mountain is done as far as the shape goes.

Now that I have the basic shapes created, its time to tweak the environment, textures, and add some plants. I modified the environment by bumping up the light intensity because in this scene its really sunny, like midday kind of sun on a clear day. I also modified the texture on the foreground plant by adding an ecosystem. One complaint I have about the plants in Vue 5 Infiniite is there really arent enough of them. There is only 1 bush too. How are you supposed to make a tropic forest with 1 bush? And unfortunately, it wasnt even the kind of bush i needed. I modified the bush that is in Vue in the plant editor and made my own little bush that i then populated across the foreground mountain. I added a couple of other plants to keep things interesting. I haven’t completely finished adding plants to the mountain and the next step is to figure out how to make Vue 5 not populate plants where i want the waterfall to be. Any ideas anyone? Please leave a comment.

Stay tuned…As the scene progresses I will be posting by end of day renders to this blog, wish me luck!

I remember when i first for Vue 5 Infinite and in the feature set it said that you could make your own plant species. This sounded very interesting to me, but it didn’t seem very intuitive on how to get to the plant editor (thank god for the help book!) and start creating my very own plants. It was easy enough to figure out but I’m sure, as you’ll see here shortly, that i am only going to graze the surface of what this tool can do. This tutorial is intended for beginners.

END_OF_DOCUMENT_TOKEN_TO_BE_REPLACED

So, I have been working on a new project lately. It’s a Horse Track, something like Pimlico. I’m planning on adding some horses running around the track. It should be pretty sweet. So far though the challenges I’ve are taking an animated horse from Poser7 and importing it in Vue 5. Actually, I had to re-install Poser6 because Vue5 can’t import Poser7 files. So I got the horse into Vue and he was galloping in place, but its hard to animate an already animated object like a horse and get it to go around the track in step. So, don’t do it that way. Its best to animate the horse at 30fps in Poser and the import that animation into Vue. That i learned today so maybe over this weekend i’ll be able to mess with that some more.

Anyway, the image I post to you today took about 2 weeks of experimentation and then 1 session of 1 hour of well-focused work. And this is the result. Still alot needed to be done but this is the best one I have made for sure!

Enjoy – i need to catch some ZZZzzzz’s — until next time! 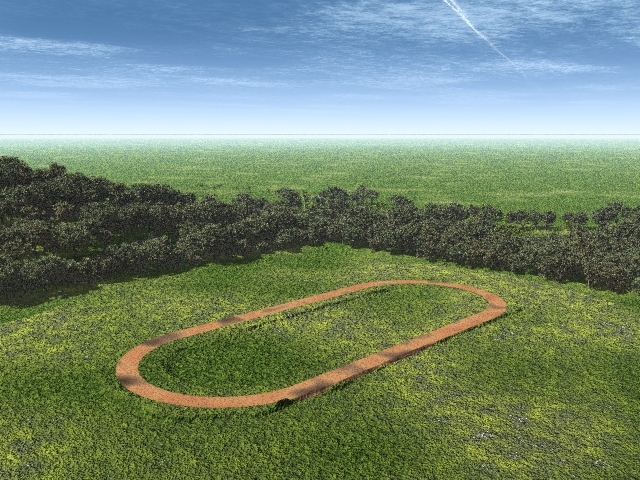 Good question. For now, nothing. I don’t think my blog is getting that much traffic that it would warrant charging any money right now. Of course, the older my blog hopefully the more traffic I will attract. So that could change. But for now, just send an email to ijwebsites@comcast.net and request to be added to Blogroll.

Of course, the best way to get on my blogroll is to add me to yours first. : )

I was surfing around tonight and I found an article on www.actiontrip.com about a new game that is accepting beta testers. The opened the game up for beta on August 20th, 2007. So, if you’re interested in experience this interesting twist on the first person genre, then head on over to www.kwari.com.

What is Kwari?
It’s best described as a Sci-Fi, rapid-action first person shooter (FPS). But wait!!! There’s alot more!!!! After all this game IS going to revolutionize the gaming industry.

What makes Kwari stand out from the rest of the first person shooters (FPS)?
Everything in the game has been designed with one thing in mind — Translate your shooter kills into some serious cash. That’s right with this game you’ll be able to make money. The website implies that even an average player should be able to get ahead in the game quickly.

What are the ways to make cash in the game?
You make cash by hitting other players and you lose money when you are hit. Every shot counts. The amount you can win is based on the stake level you play in. Other ways for you to earn cash are doing damage to yourself, break crates, picking up additional weapons, health packs, other items in the game. Each item might have a value assigned to them in the game.

Does Kwari take a percentage of the money?
No. 100% of the cash generated through playing the game goes back to the players in the form of prizes.

I’ll be back next week and write some more about this interesting game. I’m going to try to get into the beta test myself.